Introduction:
Milo: Skating in a t-shirt on his own for 15 minutes, pondering the status quo.

Topic#1
Baker arrived halfway through the session and decided that he doesn’t need to skate more than every six months to put everyone else to shame. Ollie pop: 1/2 body height. Length of grind: N16 8JH.
Conclusion: Good one. More of this.

Topic #2
Malaga
“Never skate the day before a trip” was successfully ignored. Enjoy the weather.

New Pub: The Kingsland
Verdict: A pub’s pub. A landmark of frill aversion

Conclusive remarks: “This is such a good spot” 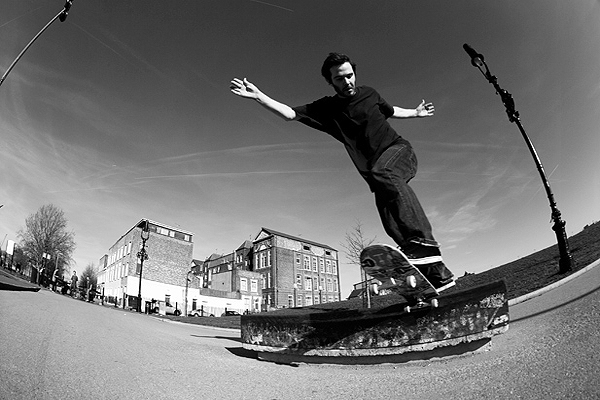 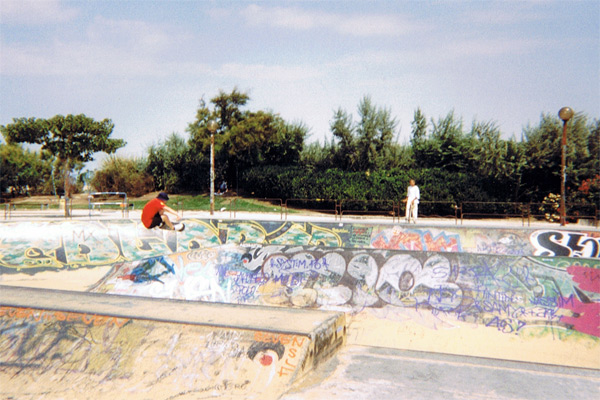 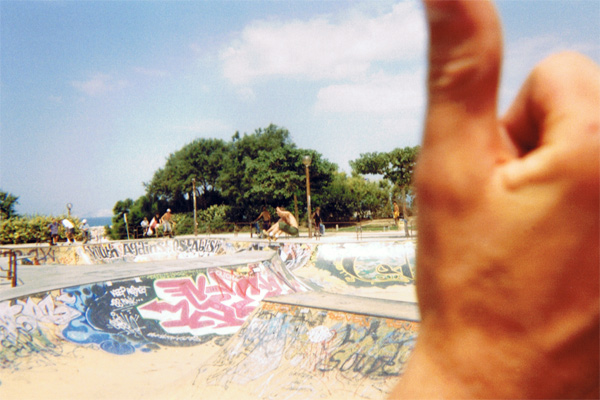 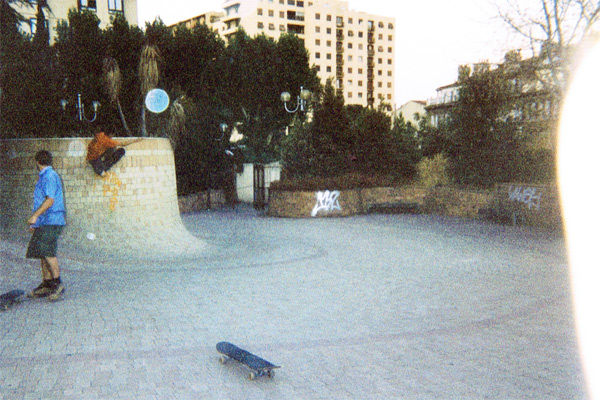 Originally published in Sidewalk Surfer magazine, around 1998.
Click below to expand full text.

[DDET Uncle Someone’s World of Something: The Fisherman]

There he sat, reading the skate magazine. He had watched a couple of skate videos earlier, and flicked through old magazines all day. He wore skate shoes with holes in, big jeans, and a tee-shirt from his favourite skate company.

He loved and lived skating.

Until the ghost came.

He was not aware of the ghost, but the ghost was very aware of him.

It began tormenting him, although it was not a bad ghost. It’s motives were very complex, but it knew that to fulfil it’s goal it had to work this way. Chasing and teasing, lying and denying, confusing and enriching. Only these tactics would change the boy’s mind, and save the boy’s soul.

The boy had been skating for three years now, and the ghost had been working on him for the last six months. The boy had a problem. He had begun to doubt his own ability at skating, as well as at school. He thought he would have to make a choice soon between school and skating, because both were suffering. His last report card had been one of his worst yet. And for the last few months he had begun to feel frustrated when he was skating. Tricks weren’t being landed properly. He had even lost a couple of flip tricks that he had previously wired. He could not succeed at both school and skating. Or so he thought.

One night the ghost told him a strange story in a dream:

There was a fisherman some time ago, who lived in the North of Scandinavia. A cold darkness reigned throughout the bitter winter, and hazy light struggled to provide warmth during the brief summer. From October to May the fisherman would catch his fish through the ice with special nets he had made, and he would use a rod on his prey from June to September. With each fishing method, there were countless little techniques and systems to try and achieve success. Each one was very difficult to learn, and required months, even years of solitary practice in order to perfect. As he had to make his own equipment as well, this took all of his spare time and energy. The nearest trees were a few days hike away, so wood was very scarce. Each device had to be built right the first time, and if not, then he simply had to adapt.

It was a learning process that he had picked up himself over many years. No one had taught him many of the things he knew. The fisherman spent his whole life learning about fishing in his own environment. He could be considered a master, a truly wise man.

One spring when the ice began to melt, some brightly coloured debris washed up on the shore. The flotsam and jetsam had come from the wreck of a cargo ship many miles off the coast. The fisherman picked through the rubbish, ignoring many items that others would have saved. Tearing open a black bag, he removed some pieces of old card and paper. Some of it had pictures of food on, including various fish he had never seen before. Amused by this, he began to chuckle and took a couple of these fish pictures with him.

On his way back to his cabin, looking at the brightly coloured packets with their strange wording and even stranger looking fish on he began to laugh out loud. He laughed most of the night to himself, pausing merely to eat the fish he had caught and cooked that day. Looking down at his plate of real, edible fish and then across to the false, inedible pictures of fish he had got from the beach he began to chuckle again. When he woke up the next day, he found himself laughing straight away. He was laughing about the other people. He knew that other people lived far away from him, over the sea. But he hadn’t realised how stupid they were, what sort of lives they led. “I catch fish and I eat them!” he shouted to an uninterested rock, “And all those people do is make pictures of fish!” He began chuckling to himself again as he pinned one of the fish pictures above his door.

From then on, every morning as he set out and every evening as he returned, he would glance up at the picture, and a broad smile would appear on his weathered face. Even on the coldest and darkest of days.

The boy awoke with a start, his memory of the dream was vague and confused. But there was something new about him. He felt good. There was a sharper focus in his eye. A smoother beat to his heart. On his way to school, he walked down the street as slowly as he could, guided by something new inside him that he hadn’t felt before. It felt so good, so relaxing. And yet he was amazed because he still got to assembly on time. The Headmaster spoke at the assembly about careers. As he was in the middle of careers week, that day he was due to meet the careers advisor to discuss his future.

The careers advisor was called Mr Hartley. He wore a tweed jacket with strange, dirty velvet trousers. He looked a mess. As he had obviously failed in life, it was very difficult to see how he could possibly inspire others down any career path. He was more likely to put you off school and learning, even life itself.

“I want to be an astronaut” the boy replied to Mr Hartley’s hopeless question.
Mr Hartley snapped in, “This is not a good time of your life to be joking around young man. Everything you do for the rest of your life will be decided here. You have to think very carefully about your decision.”
The boy did indeed know the importance of that time in his life, but in a very different way to Mr Hartley, “Okay then. I want to be a racing driver.”
“That is not a serious proposition, BOY. Look, you’re getting a letter home at this rate. Now let’s have a look at your file. Good maths grades. Have you ever thought about being an accountant?”
The boy looked down at his scuffed shoes to hide his smile. They didn’t look like the shoes of an accountant.
“What is it boy? Don’t you think you’re good enough? You can start at the bottom you know, and after a few years, well, you begin working your way up the ladder.”
The boy couldn’t help a chuckle, and then broke out into laughter.
Mr Hartley fumed and began shouting some nonsense.
The boy didn’t hear a word of it, he was laughing so much. Tears began to stream in his eyes. A blurry Mr Hartley stood up and began waving his arms about, shouting even louder. The boys laughter grew and grew, there was no stopping him now.

He could not see Mr Hartley any more, just a blurry swirl. He felt relaxed and excited at the same time. He saw only a rainbow of light, and heard laughter from himself and a thousand like him. His vision began to clear, but he was somewhere else, not in the careers room at all. He was somewhere very white.

Then the ghost slowly appeared before him. He studied it closely before understanding what it was. Then he began to see what he had learned from it. He realised now. The choices in his life were false, it wasn’t one or the other, this way or that. He was capable of going in any and all directions he wanted. The fisherman in his dream was an inspiration. The fisherman knew what he wanted, there was no clutter in his life. The boy could succeed at school and at skating – it was easy, all of it. Anything that he had ever done was easy, and now, anything that he was ever going to do would be even easier. He smiled and thanked the ghost, and it smiled back and disappeared.

The next thing he knew he was in the headmaster’s office, with Mr Hartley and the headmaster towering over him. In a surreal fashion, Mr Hartley was still trying to continue the careers discussion, “Look young man, it is my job to set you on a career path, and I will not have five minutes of stupid giggling prevent me from doing this.”
The boy looked at the careers advisor, then at the headmaster. He thought of his skating, and his school work, then he thought of the ghost, and the story it had told him in his dream. He knew how to shut them up.